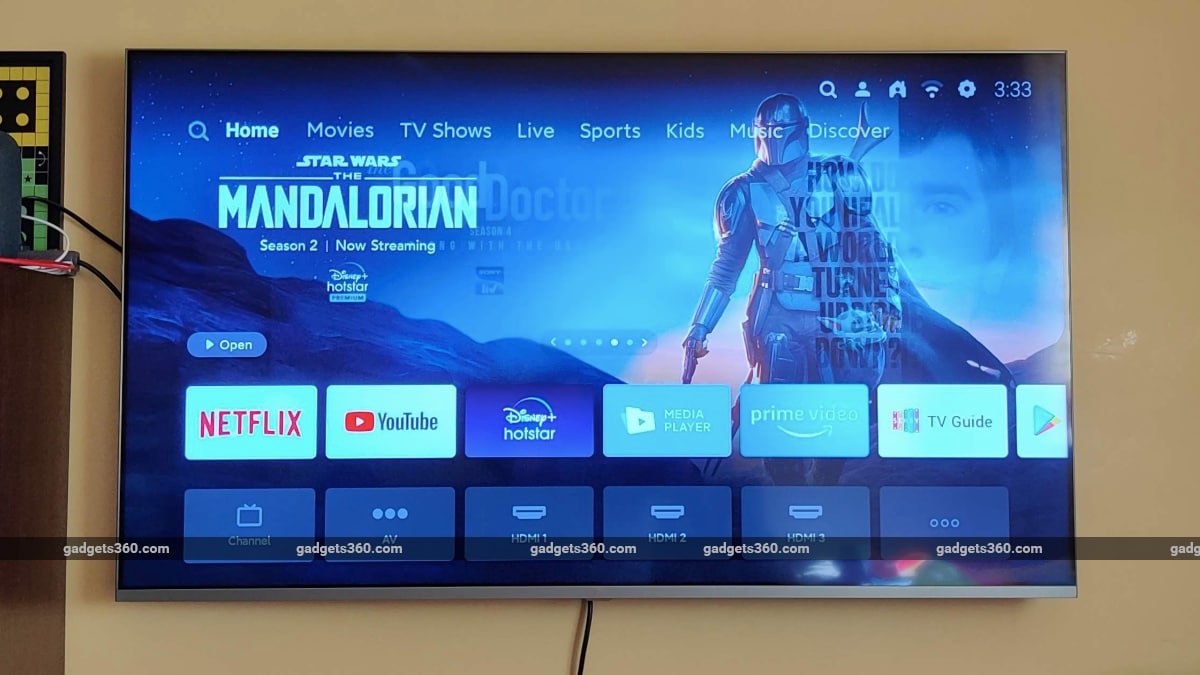 Xiaomi has been in the television game in India for nearly three years now, and it’s been quite a ride. The company’s focus on affordability, with a range of competitively priced entry-level smart LED TVs has led to rapid growth, and according to Xiaomi itself, it has become the number one smart TV brand in the country in a short time. Now, Xiaomi’s latest launch sees it give the premium TV segment a first crack.

Priced at Rs. 54,999 for the single 55-inch model, the Mi QLED TV 4K is Xiaomi’s most expensive TV in India. As the name suggests, this is a quantum-dot LED TV, and various other features such as Dolby Vision, Android TV 10, and PatchWall 3.5 make this an impressive offering on paper. I’ve had a chance to use the TV for a few days at home, and here are my first impressions.

Xiaomi’s first step into the premium segment expectedly comes with some radical design and build quality improvements, and the Mi QLED TV 4K looks and feels good. The TV has an impressive 96 percent screen-to-body ratio, with slim borders at the sides and top. Even the bottom bezel isn’t too thick, and the whole thing is held together by a metal frame. Carbon-fibre-like texturing at the back adds to the premium look and feel of this TV.

Connectivity options are impressive, with three HDMI ports (all HDMI 2.1), two USB ports, Ethernet, Optical and 3.5mm audio outputs, as well as eARC and Bluetooth 5. There’s also built-in Chromecast functionality. Although the peak refresh rate is 60Hz, this is supported at up to 4K resolution, and there’s also an auto low-latency mode with 5ms input lag, which is said to help if you intend to use the Mi QLED TV 4K for both current and next-generation console gaming. There’s also 2GB of RAM and an impressive 32GB of internal storage for apps and app data. The TV is powered by a MediaTek MTK9611 quad-core processor.

Long-pressing the Mi button now triggers quick settings, which works within any content or source

Although I’ve never been a big fan of PatchWall and have always preferred Android TV for its less cluttered interface, it has received some significant improvements with version 3.5, which is what comes on the Mi QLED TV 4K. I found the interface to be a bit less cluttered than before. There’s easier access to apps and hardware sources, somewhat improved content curation and recommendations, and better content sorting. In fact, PatchWall now looks a lot like Amazon’s Fire OS for the Fire TV series.

Android TV also sees some improvements, particularly the use of Android TV 10, making the Mi QLED TV 4K the first major launch in India with this new version. It’s worth pointing out here that this doesn’t include the Google TV interface, recently launched with the new Chromecast With Google TV. The stock Android 10 TV launcher doesn’t look any different to the Android TV 9 Pie experience we’re used to; the improvements are entirely under the hood here.

A couple of very useful additions on the Mi QLED TV 4K come as a result of Xiaomi taking feedback from both the community as well as reviews. One of these is the Quick Wake feature, which was first seen on the Mi TV 4A Horizon Edition and lets the TV resume from standby mode in less than 5 seconds. There is also the ability to quickly mute the TV by double-pressing the volume down button, and you can now quickly access various settings from within any content or source by long-pressing the Mi button on the remote. All of these come in very handy, and finally make up for the shortcomings of the rather minimalist remote.

The use of a quantum dot layer on the panel promises better and more vibrant colours, and this did indeed seem to be the case on the Mi QLED TV 4K. This is the first Xiaomi television in India to come with Dolby Vision support, and other HDR formats including HDR10+, HDR10, and HLG are also supported.

With 30W of sound output through a six-speaker system with a larger box size than most competing TVs, the Mi QLED TV 4K promises better sound. Although I haven’t tested it enough, the sound did come across as well-tuned, but not quite as loud and uniform across volume levels as I’d have liked.

Xiaomi’s first QLED TV is a step in the right direction and is priced reasonably well. Although I had hoped for a more competitive price point of under Rs. 50,000, even at Rs. 54,999, the Mi QLED TV 4K comes across as a worthwhile pick if you’re looking for a premium 55-inch TV without spending too much. The software and UI experience are among the best you can find on a television today, and the picture quality should be reasonably good as well.

With a lot of attention paid to specifications, and particularly those meant to benefit next-gen gaming consoles, the Mi QLED TV 4K might be worth looking at if you plan to pick up a PS5 or Xbox Series X. Even if you intend to stick to streaming movies, TV shows, and videos from major platforms, the Mi QLED TV 4K should be suitably equipped to handle all kinds of content across sources and resolutions.

Rising Cost of Data a Concern, MoS IT Says After Airtel Tariff Price Hike
Samsung Wallet App Rolling Out in Eight More Countries Including India: All Details
Mailchimp Suffers Another Security Breach Compromising Some Customers’ Information
Feds seize almost $700 million of FTX assets in Sam Bankman-Fried criminal case
The Lord of the Rings: Gollum Gets a New Launch Window, Will Release by September 2023