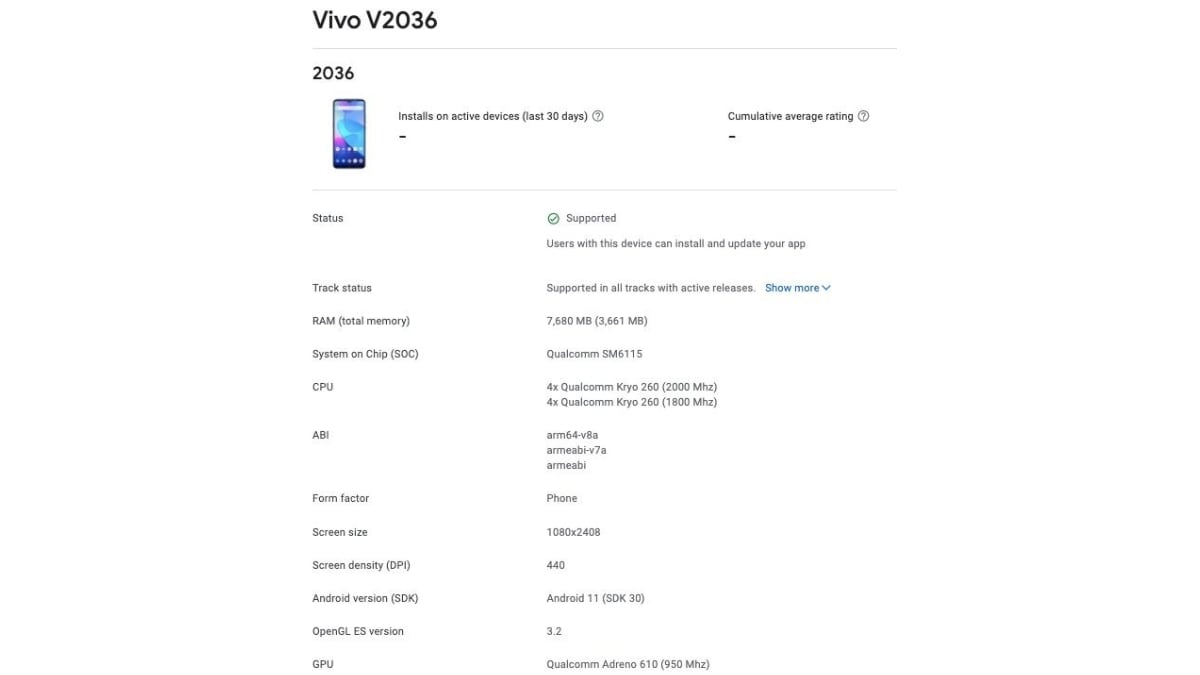 Vivo Y31 has been reportedly spotted on Google Play Console with some specifications and a front panel image. Vivo is gearing up to launch the Vivo X60 series later this month, but the company might also launch the budget Vivo Y31 soon. The Google Play Console listing suggests that the rumoured Vivo Y31 could be powered by Qualcomm Snapdragon 662 SoC paired with 4GB of RAM, and come with Android 11. So far, Vivo has not revealed any details about the phone, or announced a launch date.

The Google Play Console listing was first spotted by MySmartPrice. It lists the Vivo Y31 with model number V2036. As per the listing, the Vivo Y31 is tipped to feature a full-HD+ display with 1,080×2,408 pixels resolution and 440 dpi screen density. The phone is listed to run on Android 11 out of the box. It is said to be powered by the Qualcomm Snapdragon 662 SoC paired with 4GB RAM and Adreno 610 GPU.

Vivo Y31 Google Play Console listing has an image of the phone that shows the front panel design of the phone. It is seen to sport a waterdrop-style notch on the display for the selfie camera and a slight chin at the bottom. But this could also just be a placeholder image and Vivo may introduce the Vivo Y31 in an altered design.

As mentioned, there is no word on when the Vivo Y31 will launch officially. The phone is likely be a successor of the Vivo Y30 that was launched in India in July. Recently, the company also introduced the Vivo Y30 Standard Edition in China, which is powered by MediaTek Helio P35 SoC and a 5,000mAh battery. The phone features a 6.51-inch HD+ (720×1,600 pixels) IPS LCD and boasts of 89 percent screen-to-body ratio. Vivo Y30 Standard Edition is priced at CNY 1,398 (roughly Rs. 15,700) for the sole 6GB RAM + 128GB storage model.

Tasneem Akolawala
Tasneem Akolawala is a Senior Reporter for Gadgets 360. Her reporting expertise encompasses smartphones, wearables, apps, social media, and the overall tech industry. She reports out of Mumbai, and also writes about the ups and downs in the Indian telecom sector. Tasneem can be reached on Twitter at @MuteRiot, and leads, tips, and releases can be sent to [email protected]
More