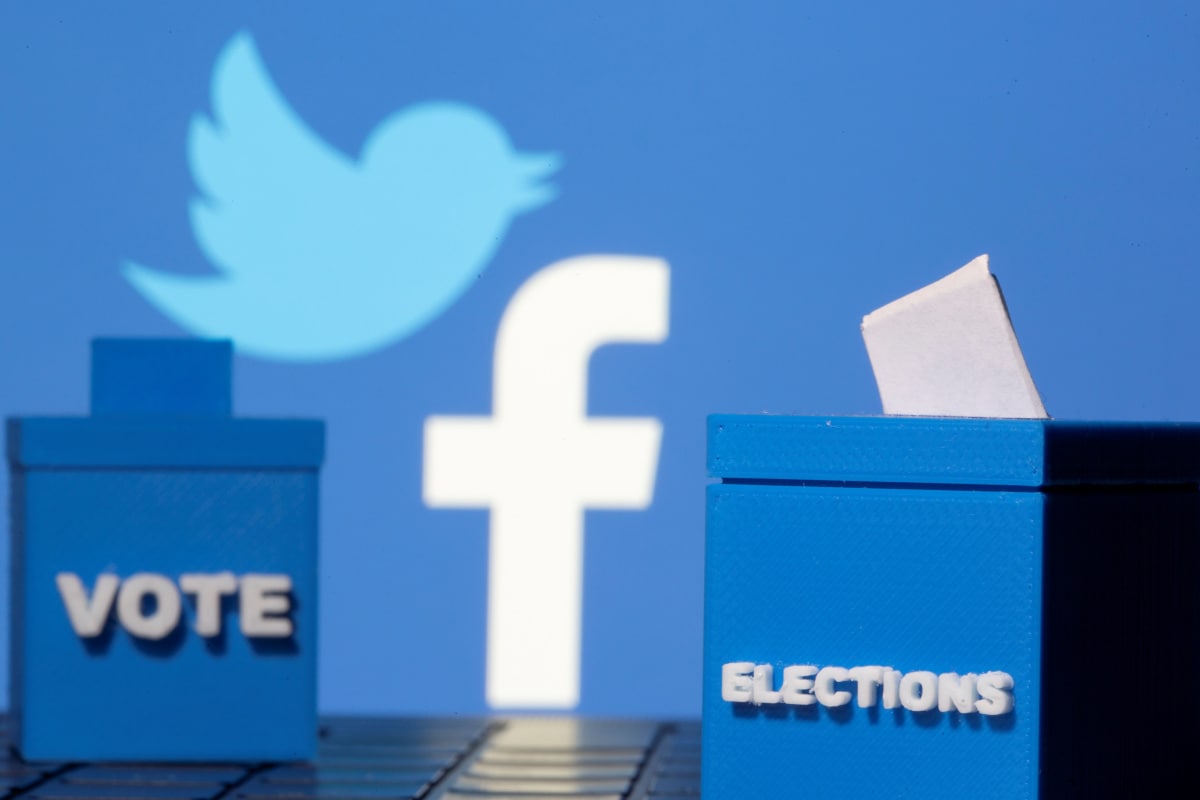 As US President Donald Trump and his allies flooded social media on Wednesday with false claims of victory and unsupported allegations of voter fraud, social media companies warned users that the presidential election had yet to be decided.

The posts on Twitter, Facebook and other sites are imposing a real-time test of Silicon Valley’s much-touted rules on handling election misinformation and premature claims of victory.

But it is not clear whether the disclaimers and fact-checks, which often occur well after posts have been shared tens of thousands of times, are curbing the circulation of baseless claims. And in the case of Facebook, staff rewrote the rules regarding state victories on the fly.

Critics say that, in environments explicitly built to promote instant sharing and viral posts, bland disclaimers do not cut it.

“We’re on the brink here,” said Jessica Gonzalez, co-CEO of the advocacy group Free Press. She said Facebook needed to take down “disinformation about our democracy” rather than just flag it.

“We’re testing our democracy experiment, and Facebook hasn’t gotten it right up to now,” Gonzalez said.

The false and unfounded claims have evolved over the course of the day. Initially, Trump said he had won (he hasn’t.) Then he said that unanticipated mail-in votes were appearing out of nowhere (in fact they were long-expected.) More recently, Trump’s campaign claimed it had won Pennsylvania (where votes are still being counted.)

The claims come as Trump’s lead in battleground states has evaporated as more ballots are being counted in Michigan and Wisconsin, a process that has taken longer than usual as a result of the COVID-19 pandemic and extraordinarily high turnout. Trump’s Democratic challenger Joe Biden is projected to win Wisconsin and Michigan.

The extended count is no surprise, and neither was the late swing to Trump’s opponent, Joe Biden, which was widely predicted in the run-up to the vote, including by Reuters. That did not stop Trump and his supporters from repeatedly trying to flood the Internet with unfounded allegations of fraud.

Twitter marked three of Trump’s latest tweets, including one making a false claim about “surprise ballot dumps,” as potentially “misleading about an election or other civic process.” It also tagged statements by Trump’s son Eric and White House Press Secretary Kayleigh McEnany that claimed victory in Pennsylvania with the disclaimer that “official sources may not have called the race when this was Tweeted.”

Last night I was leading, often solidly, in many key States, in almost all instances Democrat run & controlled. Then, one by one, they started to magically disappear as surprise ballot dumps were counted. VERY STRANGE, and the “pollsters” got it completely & historically wrong!

Facebook also marked multiple posts from the president because votes were still being counted.

Even if the disclaimers are curbing the spread of misinformation on their platforms, they have not stopped other media from amplifying Trump’s comments or his claims from hopping from one platform to another.

On Fox News, Trump’s tweets have been read out verbatim on Wednesday, sometimes without caveats about their veracity. And on the video-sharing site TikTok, a group called the Republican Hype House shared a video featuring a false claim that Michigan found 138,000 ballots in a lake.

TikTok said the video was later removed for violating its policy against misleading information. Fox did not respond to an email seeking comment.

Social media companies have been under scrutiny over how they police rapidly spreading false information and election-related abuses of their platforms. In the weeks before Tuesday’s vote, both vowed action on posts by candidates trying to declare early victory.

The attempts at policing those declarations began early on Wednesday, when Twitter hid a Trump tweet that claimed “we are up BIG, but they are trying to STEAL the Election” behind a label that said it was potentially misleading. The company also restricted users’ ability to share the post.

Facebook added a label to the same post, which had about 25,000 shares, that said “final results may be different from initial vote counts as ballot counting will continue for days or weeks.”

Facebook said that following Trump’s premature claims of victory it had started running top-of-feed notifications on Facebook and its photo-sharing site Instagram telling users that votes were still being counted and no winner had been projected. It said automatic labels were also being applied to both candidates’ posts with this information.