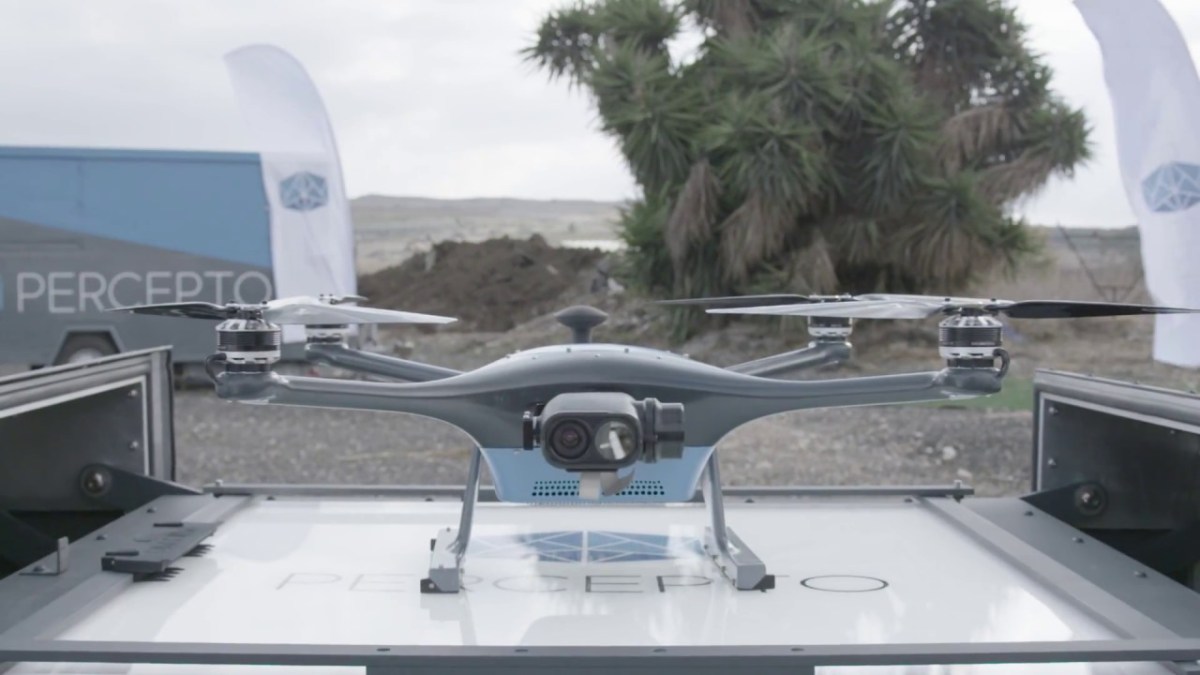 According to a report from Technavio, the inspection robot market has the potential to grow to $3.72 billion between 2020 and 2024, bolstered by industries spanning energy, oil and gas, and mining. Beyond their cost-effectiveness, robots have the ability to travel where humans can’t — either for safety or physical reasons. Machines like Spot can also be equipped with specialized hardware that delivers more detailed, consistent analytics and insights than an inspector could.

Percepto is the brainchild of Dor Abuhasira and Raviv Raz, who were inspired to create the company’s first product — a quadcopter dubbed Sparrow I — after returning home from a snowboarding trip with disappointing drone footage. Following a successful Indiegogo campaign, they took steps to commercialize their drone-in-a-box solution: a portable base station from which Sparrow I charges, launches, lands, syncs data with a cloud management system over LTE, and performs automated pre- and post-flight checks.

Sparrow I can be piloted on-demand or autonomously, operates during the day or night, and integrates with connected devices like “smart fences” and motion detectors to respond to alerts. The carbon fiber composite drone — which packs a rechargeable battery, 5G-compatible radios, an integral parachute, a high-resolution RGB camera, and a thermal camera — weighs about 19 pounds and can fly up to three miles round trip at speeds upwards of 46 miles per hour and a maximum height of 400 feet. It has a quoted flight time of about 38 minutes, can land in snow and rain, and is able to withstand winds of up to 150 miles per hour.

Percepto’s software leverages Sparrow I’s sensor data to track humans, vehicles, and anomalies in real time, and its orchestration dashboard enables drone pilots to define no-fly zones, free flight areas, and emergency landing zones within geofenced sites. It ties in with Percepto’s new Autonomous Inspection & Monitoring (AIM) platform, which allows customers to operate a fleet of third-party robots by deploying the most suitable machine for a task to retrieve and stream data.

For example, orchestrated through AIM, Spot carries Percepto’s sensor payload for high-resolution imaging and thermal vision to detect issues, including hot spots on machines or electrical conductors, water and steam leaks around plants, and equipment with degraded performance.

On the drone side of the equation, Percepto has rivals in H3dynamics, Skysense, and Airbotics, which are similarly developing drone-in-a-box solutions. It also competes indirectly with DJI’s Mavic 2 Enterprise, a solution tailor-made for firefighting; law enforcement; emergency response; and inspection of power lines, cell towers, and bridges. Paris-based Parrot’s recently announced Anafi Thermal is another potential rival.

But Percepto says business is steady and claims it has Fortune 500 customers in more than 10 countries, including ICL Dead Sea, Florida Power and Light (FPL), Verizon’s Skyward, and Italian electricity and gas distributor Enel. In September, Skyward gained approval from the U.S. Federal Aviation Administration that allowed pilots to fly the Sparrow drone from their homes to inspect communications infrastructure near the Big Hollow wildfire in Washington. FPL has a waiver for Sparrow flights two miles beyond the visual line of sight at one of the power utility’s 11,000-acre Florida plants, where Percepto’s drones stay above 130 feet to avoid power poles and other obstructions. And ICL Dead Sea has been operating Percepto drones to carry out inspection, safety, and security missions in its operations at the Dead Sea site.

Percepto also says it has participated in an experimental urban warfare scenario program organized by the Department of Homeland Security’s Science and Technology Directorate and the U.S. Army, which sought to test the Sparrow I’s suitability for surveillance and reconnaissance missions.

“Our customers, which include some of the world’s leading utility, oil and gas sites; mining; and other critical infrastructure facilities, are eager to fully embrace automation across their operations and reap the benefits of driving efficiency, reducing costs, and safeguarding staff. We’re excited to be the first to empower our customers with truly autonomous inspection and monitoring, driven by the management of multiple visual robotic data sources, together with other visual sources, including piloted drones, CCTV, and mobile cameras, on site or remotely,” CEO Abuhasira said, “We’re delighted that our investors have recognized the growing need in the market for autonomous inspection, which is in demand now, more than ever.”