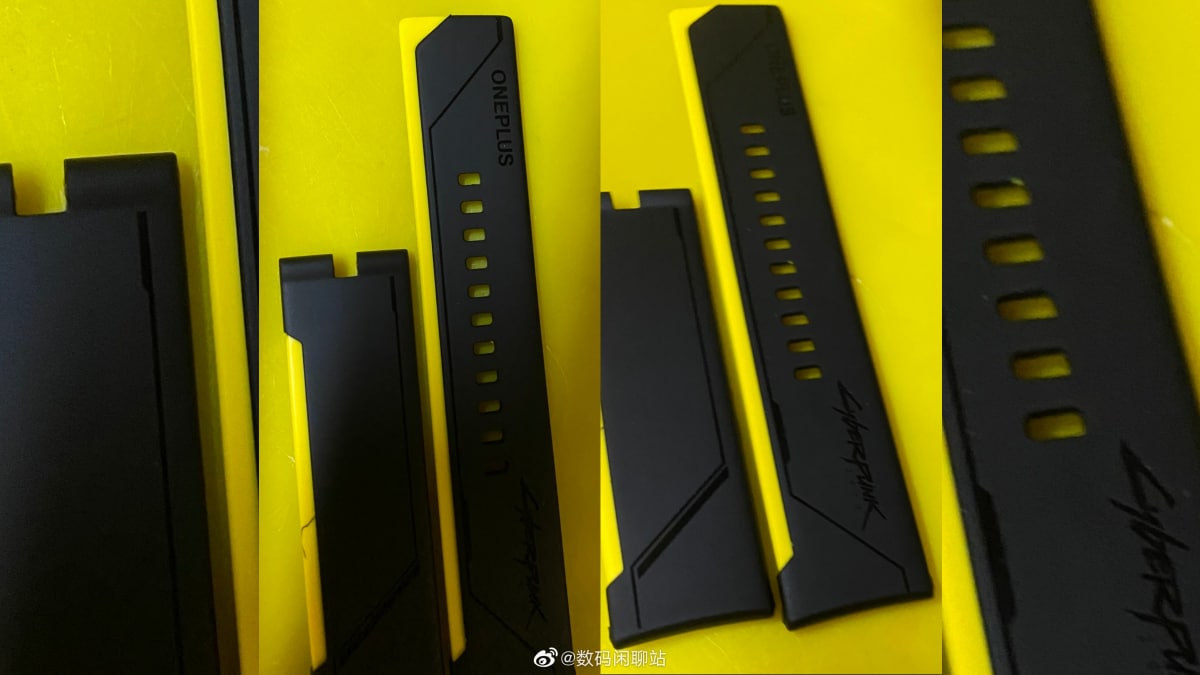 OnePlus Watch is back in the news with a fresh leak hinting at a Cyberpunk 2077 Edition of the smartwatch in the offing. OnePlus Watch is not yet official and a recent report suggested that the wearable may have been delayed indefinitely. A tipster shared pictures of the watch straps, marked by the game’s logo and a yellow-black design. The company recently introduced the OnePlus 8T Cyberpunk 2077 Edition smartphone to celebrate the arrival of the highly-anticipated new game by CD Projekt Red.

Tipster Digital Chat Station shared an image showing off straps of what he claims to be the OnePlus Watch Cyberpunk 2077 Edition on Weibo. The straps show unique cuts and have the words ‘OnePlus‘ and ‘Cyberpunk’ embossed on them. The image shows the straps to don a matte black finish. However, the tipster did not reveal the dial.

Last month, OnePlus teased the arrival of a smartwatch in India, hinting that it may arrive soon. However, ever since that teaser, OnePlus has remained quiet about its smartwatch launch plans. A recent report suggests that the company has indefinitely delayed the launch of the OnePlus Watch. The reason for this postponement is not clear but complications with the production or software development are speculated.

Past leaks hint that the OnePlus Watch may sport a circular dial design, and it was even spotted on BIS certification in September this year. The wearable may have been delayed, but it is not completely shelved if the new leak is to be believed. Apart from the Cyberpunk 2077 Edition, there should also be a vanilla OnePlus Watch launch in the future.

OnePlus introduced OnePlus 8T last month, along with OnePlus Nord N10 5G and OnePlus Nord N100. OnePlus Watch was expected to be unveiled alongside the aforementioned launches, but it remains unofficial to date.