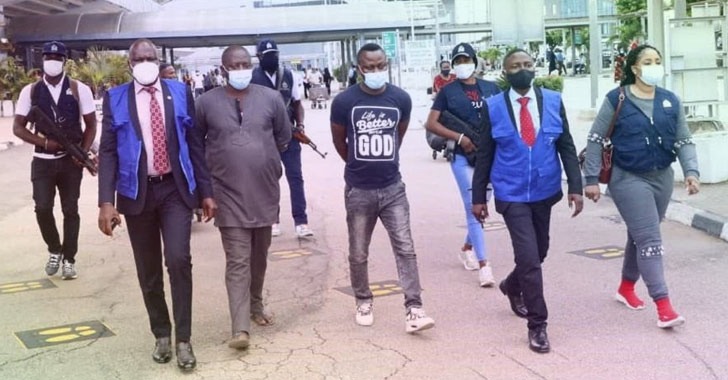 Three Nigerian citizens suspected of being members of an organized cybercrime group behind distributing malware, carrying out phishing campaigns, and extensive Business Email Compromise (BEC) scams have been arrested in the city of Lagos, Interpol reported yesterday.

The investigation, dubbed “Operation Falcon,” was jointly undertaken by the international police organization along with Singapore-based cybersecurity firm Group-IB and the Nigeria Police Force, the principal law enforcement agency in the country.

About 50,000 targeted victims of the criminal schemes have been identified so far, as the probe continues to track down other suspected gang members and the monetization methods employed by the group.

Group-IB’s participation in the year-long operation came as part of Interpol’s Project Gateway, which provides a framework for agreements with selected private sector partners and receives threat intel directly.

“The suspects are alleged to have developed phishing links, domains, and mass mailing campaigns in which they impersonated representatives of organizations,” Interpol said. “They then used these campaigns to disseminate 26 malware programmes, spyware and remote access tools, including AgentTesla, Loki, Azorult, Spartan and the nanocore and Remcos Remote Access Trojans.”

In addition to perpetrating BEC campaigns and sending out emails containing malware-laced email attachments, the attacks have been used to infiltrate and monitor the systems of victim organizations and individuals, leading to the compromise of at least 500,000 government and private sector companies in more than 150 countries since 2017.

According to Group-IB, the three individuals — identified only by their initials OC, IO, and OI — are believed to be members of a gang which it has been tracking under the moniker TMT, a prolific cybercrime crew that it says is divided into multiple smaller subgroups based on an analysis of the attackers’ infrastructure and techniques.

Some of their mass email phishing campaigns took the form of purchasing orders, product inquiries, and even COVID-19 aid impersonating legitimate companies, with the operators leveraging Gammadyne Mailer and Turbo-Mailer to send out phishing emails. The group also relied on MailChimp to track whether a recipient opened the message.

The ultimate goal of the attacks, Group-IB noted, was to steal authentication data from browsers, email, and FTP clients from companies located in the US, the UK, Singapore, Japan, Nigeria, among others.

“This group was running a well-established criminal business model,” Interpol’s Cybercrime Director Craig Jones noted. “From infiltration to cashing in, they used a multitude of tools and techniques to generate maximum profits.”