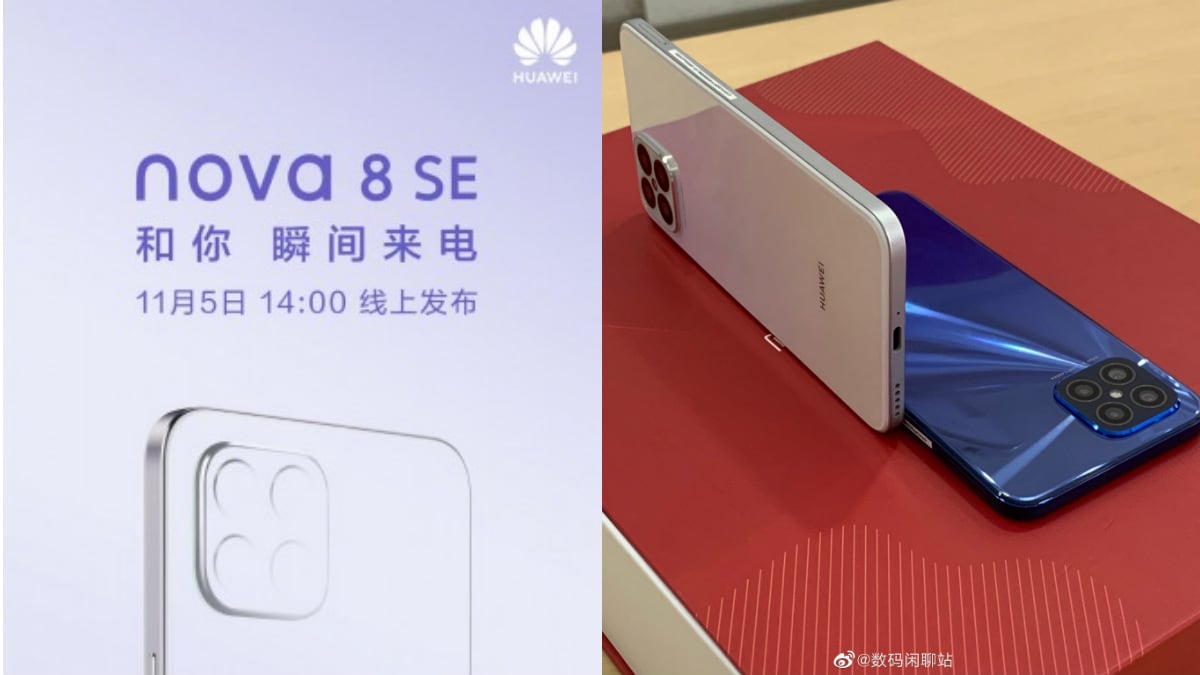 Huawei Nova 8 SE will be launched on November 5, the company has revealed. According to an official poster shared on Weibo, the smartphone will come equipped with a quad rear camera setup. This matches previous rumours. A tweet also sheds light on the handset’s key specifications. According to the tweet, the smartphone will come equipped with a 6.53-inch OLED display, and 3,800mAh battery. The Huawei Nova 8 SE is a part of the Nova 8 series that has been in the news lately.

According to an official poster shared on Chinese microblogging website Weibo, the smartphone will be launched in China on November 5 at 2pm local time (11.30am IST). A previous report had also claimed that the phone will debut in November. It also shows the phone featuring a quad rear camera setup and Apple iPhone 12 series-like flat frame. The power button and volume rocker are placed on the right side of the frame.

More of information comes from a tweet by well-known Chinese tipster Digital Chat Station. The tipster has shared a few images of the Huawei Nova 8 SE which show the Huawei Nova 8 SE’s design, and delve out information about key specifications of the handset. The images show the smartphone in White and Blue colours. There is a quad rear camera setup, and a USB Type-C port for charging, with the tipster detailing a 3,800mAh battery and 66W fast charging.

As far as the hardware is concerned, the Huawei Nova 8 SE is claimed to sport a 6.53-inch full-HD+ OLED display with a waterdrop notch and an alleged resolution of 1080×2460 pixels. The display is said to feature a 60Hz refresh rate. The phone is 7.46mm thick and weighs around 178 grams, the tweet says.

Under the hood, the phone is said to come equipped with MediaTek Dimesity 800U SoC. For photography, the Huawei Nova 8 SE will reportedly come with a 64-megapixel primary sensor on the rear quad camera setup. The tweet further says that the primary camera will be accompanied by an 8-megapixel ultra wide angle camera and two 2-megapixel sensors. For selfies and video calls, the phone may come with a 16-megapixel camera on the front.