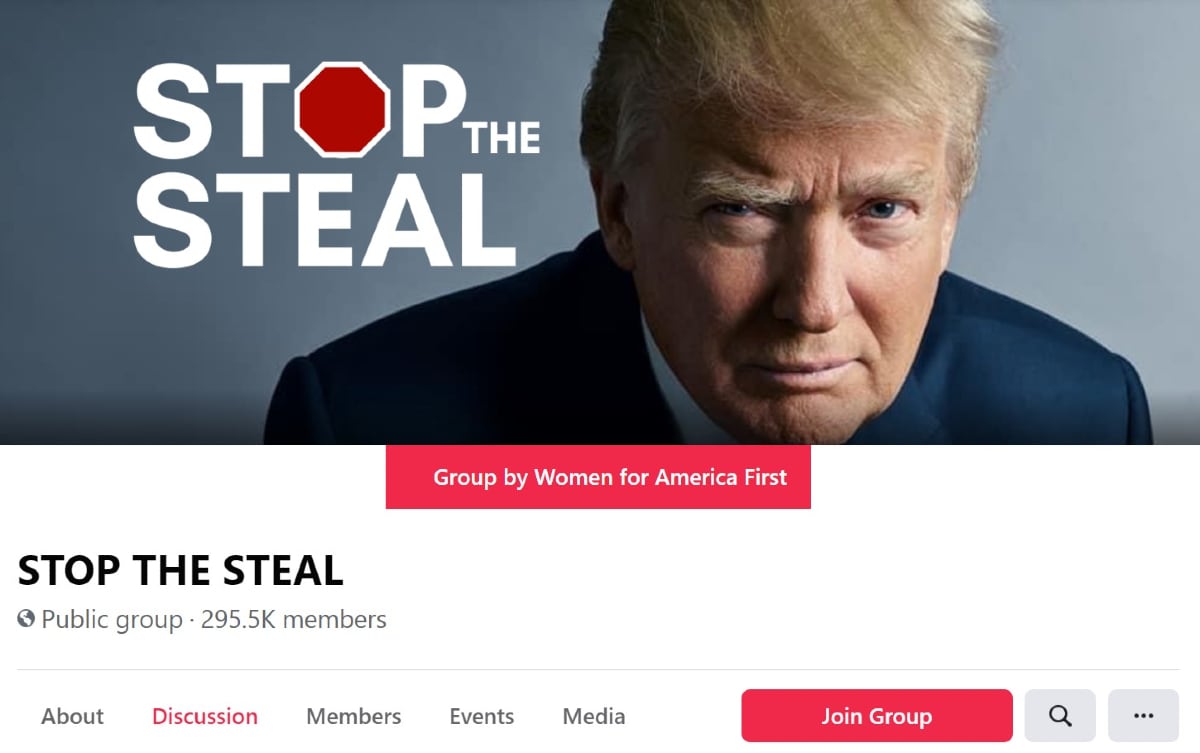 Before Facebook shut down a rapidly growing “Stop the Steal” Facebook Group on Thursday, the forum featured calls for members to ready their weapons should President Donald Trump lose his bid to remain in the White House.

In disabling the group after coverage by Reuters and other news organizations, Facebook cited the forum’s efforts to delegitimize the election process and “worrying calls for violence from some members.”

Such rhetoric was not uncommon in the run-up to the election in Facebook Groups, a key booster of engagement for the world’s biggest social network, but it did not always get the same treatment.

A survey of US-based Facebook Groups between September and October conducted by digital intelligence firm CounterAction at the request of Reuters found rhetoric with violent overtones in thousands of politically oriented public groups with millions of members.

Variations of twenty phrases that could be associated with calls for violence, such as “lock and load” and “we need a civil war,” appeared along with references to election outcomes in about 41,000 instances in U.S.-based public Facebook Groups over the two month period.

Other phrases, like “shoot them” and “kill them all,” were used within public groups at least 7,345 times and 1,415 times respectively, according to CounterAction. “Hang him” appeared 8,132 times. “Time to start shooting, folks,” read one comment.

Facebook said it was reviewing CounterAction’s findings, which Reuters shared with the company, and would take action to enforce policies “that reduce real-world harm and civil unrest, including in Groups,” according to a statement provided by spokeswoman Dani Lever.

The company declined to say whether examples shared by Reuters violated its rules or say where it draws the line in deciding whether the phrase “incites or facilities serious violence,” which, according to its policies, is grounds for removal.

Prosecutors have linked several disrupted militia plots back to Facebook Groups this year, including a planned attack on Black Lives Matters protesters in Las Vegas and a scheme to kidnap the governor of Michigan.

To address concerns, Facebook announced a flurry of policy changes since the summer aimed at curbing “militarized social movements,” including U.S. militias, Boogaloo networks and the QAnon conspiracy movement.

It says it has removed 14,200 groups on the basis of those changes since August.

As pressure on the company intensified ahead of the election, Zuckerberg said Facebook would pause recommendations for political groups and new groups, although that measure did not prevent the “Stop the Steal” group for swelling to more than 365,000 members in less than 24 hours.

Facebook has promoted Groups aggressively since Chief Executive Mark Zuckerberg made them a strategic priority in 2017, saying they would encourage more “meaningful connections,” and this year featured the business in a Super Bowl commercial.

It stepped up Groups promotion in news feeds and search engine results last month, even as civil rights organizations warned the product had become a breeding ground for extremism and misinformation.

The public groups can be seen, searched and joined by anyone on Facebook. Groups also offer private options that conceal posts – or the existence of the forum – even when a group has hundreds of thousands of members.

Facebook has said it relies heavily on artificial intelligence to monitor the forums, especially private groups, which yield few user reports of bad behavior as members tend to be like-minded, to flag posts that may incite violent actions to human content reviewers.

While use of violent language does not always equate to an actionable threat, Matthew Hindman, a machine learning and media scholar at George Washington University who reviewed the results, said Facebook’s artificial intelligence should have been able to pick out common terms for review.

“If you’re still finding thousands of cases of ‘shoot them’ and ‘get a rope,’ you’re looking at a systemic problem. There’s no way a modern machine learning system would miss something like that,” he said.

Everyone’s watching Meta’s earnings report for a hint at how online ads are doing
Twitter Working to Introduce Payments Feature Amid Drop in Advertising Income: Report
Why AMD is faring much better than Intel in the same tough economy
ChatGPT Writes Essays on Constitutional Law, Taxation, Passes Exams at US Law School
NoiseFit Force Rugged Smartwatch With Over 150 Watch Faces, Bluetooth Calling Launched in India: All Details