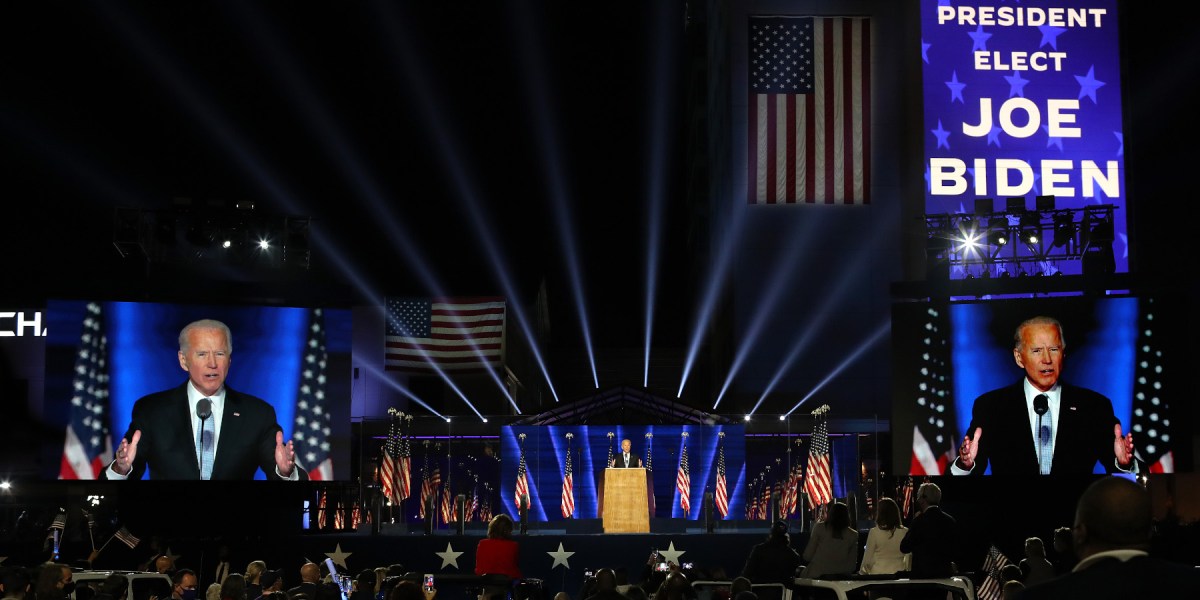 After the defeat of Donald Trump, there was little time between Joe Biden and Kamala Harris’ celebratory speeches and the start of conversations about transition team members and key administration appointments.

Some of the first names to emerge include people with tech backgrounds like former Google CEO Eric Schmidt who may be tapped to lead a tech industry panel in the White House. Since leaving Google, Schmidt extended his services to the Pentagon especially for machine learning. He also acted as head of the Defense Innovation Board at the Pentagon, and the National Security Commission on AI, a group advising Congress that more federal spending is needed to compete with China. NSCAI commissioners have so far recommended things like the creation of a government-run AI university and increasing public-private partnership in the semiconductor industry.

Hearing names like Schmidt and others raised questions about how close the administration will get with Big Tech at a time when tech companies are gaining reputations as the next Big Tobacco. Unlike when Biden first entered the White House in 2009, a number of sources today say Big Tech’s concentration of power is an accelerant of inequality.

A Department of Justice antitrust lawsuit against Google and a congressional committee investigation both found that Big Tech companies enjoy an edge based on compute, machine learning, access to large amounts of personal data, and wealth. The congressional report also concludes that Big Tech poses a threat to competitive free market economy but also democracy.

A paper covered by VentureBeat this week found that a compute divide is driving inequality in AI research, concentrating power, and giving an advantage to universities and Big Tech companies in the age of deep learning. The Biden campaign platform committed to increases in federal research and development spending in areas like AI and 5G up to $300 billion, spending that could help address that inequality as well as projects identified by groups like the NSCAI.

The Obama-Biden administration developed a reputation for bringing new concepts into the White House like appointment of a chief technology officer and chief data scientist, support for open access to data, and championing public service by people with tech skills, but that all seems like a long time ago.

Speaking to changing attitudes since then, Tim Wu, who testified as part of a congressional antitrust investigation into Congress, told the Financial Times “There has been a shift since the Obama administration, even among the people working in that administration, in the way they think about power in the tech world.”

Despite those changes, work to build civic tech that improves lives remains undone, said Nicole Wong, who served as deputy White House CTO. She entered the role shortly after the Edward Snowden leaks went public in 2014 and was responsible for privacy, internet, and innovation policy. She was also part of legal teams at Google and Twitter. Wong is now serving on a Biden review team for the National Security Council, according to Reuters.

In a speech delivered about a year ago at Aspen Tech Policy Hub in San Francisco, she said the government has outdated and inefficient tech, and that there’s a pipeline problem for people with tech skills who want to apply their talent to public service. Wong said she still believes that the government can make technology that improves human lives and that it’s important that it do so. Modernizing outdated government tech isn’t moonshot technology, she said, but public trust is at its lowest rate since the 1970s, a trend that started before Trump came into office. That pipeline issue is important because the decline in public trust is due in part to a failure to deliver for the people.

“That’s why the non-glamorous work of modernizing a 70-year-old system matters just as much or more as perfecting a self-driving car, or putting a person on Mars,” she said. “If we can order a gluten-free chocolate cake on our mobile phone while sitting in our living room and have it delivered in an hour then we should be able to help a single mother get food stamps without having to take a day off work and fill out paperwork and stand in line at a limited hours government office. We should be able to get our benefits to our veterans who fought for our country and the world that makes this tech possible.”

Some believe Biden plans to take on Big Tech companies like Facebook. Gene Kimmelman, who testified in favor of antitrust reform last year, will be part of the Department of Justice review team, for example. Others have concluded that initial appointments signal the opposite.

If you’re interested in seeing particulars about some of the tech connections, Protocol made an interactive graph that shows connections between acquaintances, family, and current and former employers. Who the Biden administration chooses may reflect its priorities, the diverse coalition that delivered the Biden ticket to the office, and may inspire people to the kind of public service that Wong talked about in order to solve moonshot problems and improve people’s lives. They can also reflect the shift in attitudes about Big Tech and power that Wu mentioned. The involvement of people like chief of staff Ron Klain seems to indicate they will at least believe in science.

In the days and weeks ahead, we will learn more about what the Biden cabinet and heads of federal agencies will look like. Building the Biden administration will have to take a lot of factors into account, from short term problems like a a global pandemic and urgent need for U.S. economic recovery, but also longer term issues like the decline in public trust in government, concentration of power by Big Tech, the continuing decline of democracy in our time, and the increase of surveillance and autocratic rule at a time of accelerating deployments of AI in business and government.

For AI coverage, send news tips to Khari Johnson, Kyle Wiggers, and Seth Colaner — and be sure to subscribe to the AI Weekly newsletter and bookmark our AI Channel.