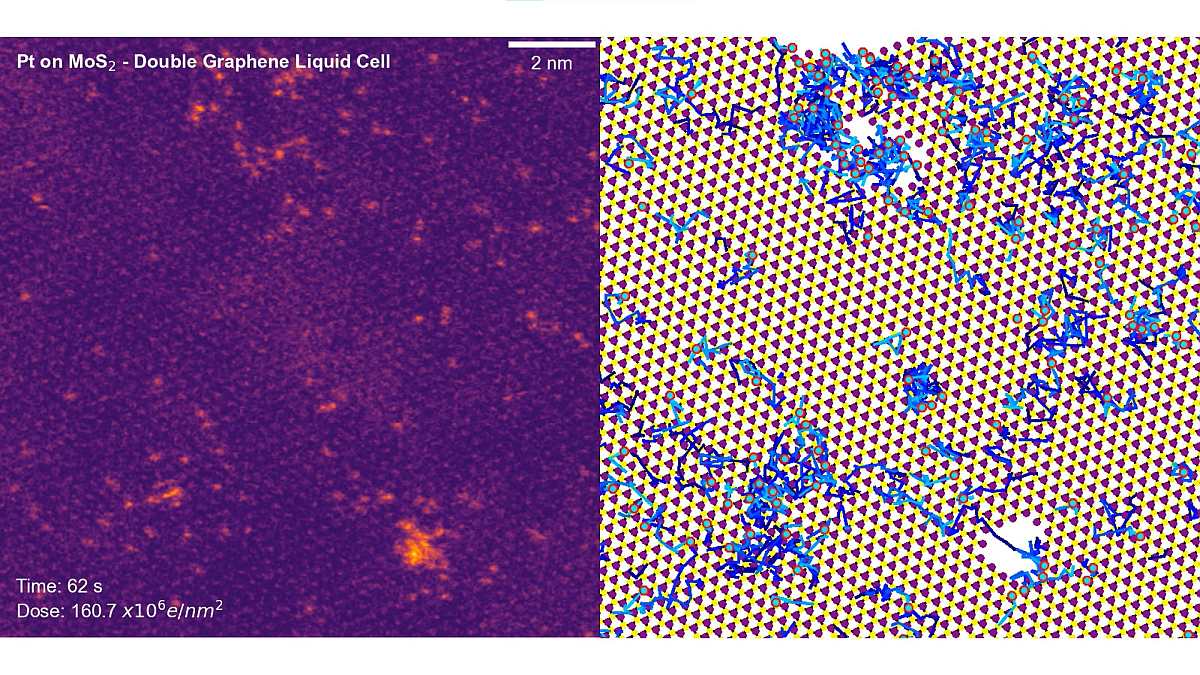 Developing a method to observe the movement of atoms in a liquid, scientists from the University of Manchester have captured — for the first time — images of single atoms swimming in liquid. When a solid and a liquid come in contact with each other, both substances tend to change their configuration. This solid-liquid atomic-scale interaction governs the behaviour of batteries and fuel cells for generating clean energy. In addition, it also it also helps determine the efficiency of clean water generation and plays role in many biological processes.

To get an insight into this interaction, researchers created a nano-petri dish using two-dimensional (2D) materials. They stacked up the material, which included graphene, and trapped platinum atoms in liquid to understand the effects of the presence of liquid on a solid.

A single platinum atom in motion in a liquid cell
Photo Credit: The University of Manchester/Clark et al.

“Given the widespread industrial and scientific importance of such behaviour it is truly surprising how much we still have to learn about the fundamentals of how atoms behave on surfaces in contact with liquids. One of the reasons information is missing is the absence of techniques able to yield experimental data for solid-liquid interfaces,” explained professor Sarah Haigh from the University of Manchester. She is also one of the lead authors of the study published in Nature.

In order to analyse or observe individual atoms, scientists use transmission electron microscopy (TEM), one of the few techniques used for the purpose. But, in TEM, a high vacuum environment is required which changes the structure of materials. “In our work we show that misleading information is provided if the atomic behaviour is studied in vacuum instead of using our liquid cells,” said materials engineer Dr Nick Clark.

In the experiment, the team suspended a 2D layer of molybdenum disulphide in liquid and encapsulated by grapheme windows. The design provided controlled liquid layers that in turn helped capture videos showing single atoms swimming in the liquid.

The observations gave a better understanding of the effects of liquid on atomic behavior. Researchers noted that the speed of the atoms increased in the presence of liquid while it also changed their preferred resting sites with respect to the underlying solid. While the team studied the material that is useful in green production hydrogen, the technique can be used in other applications as well.