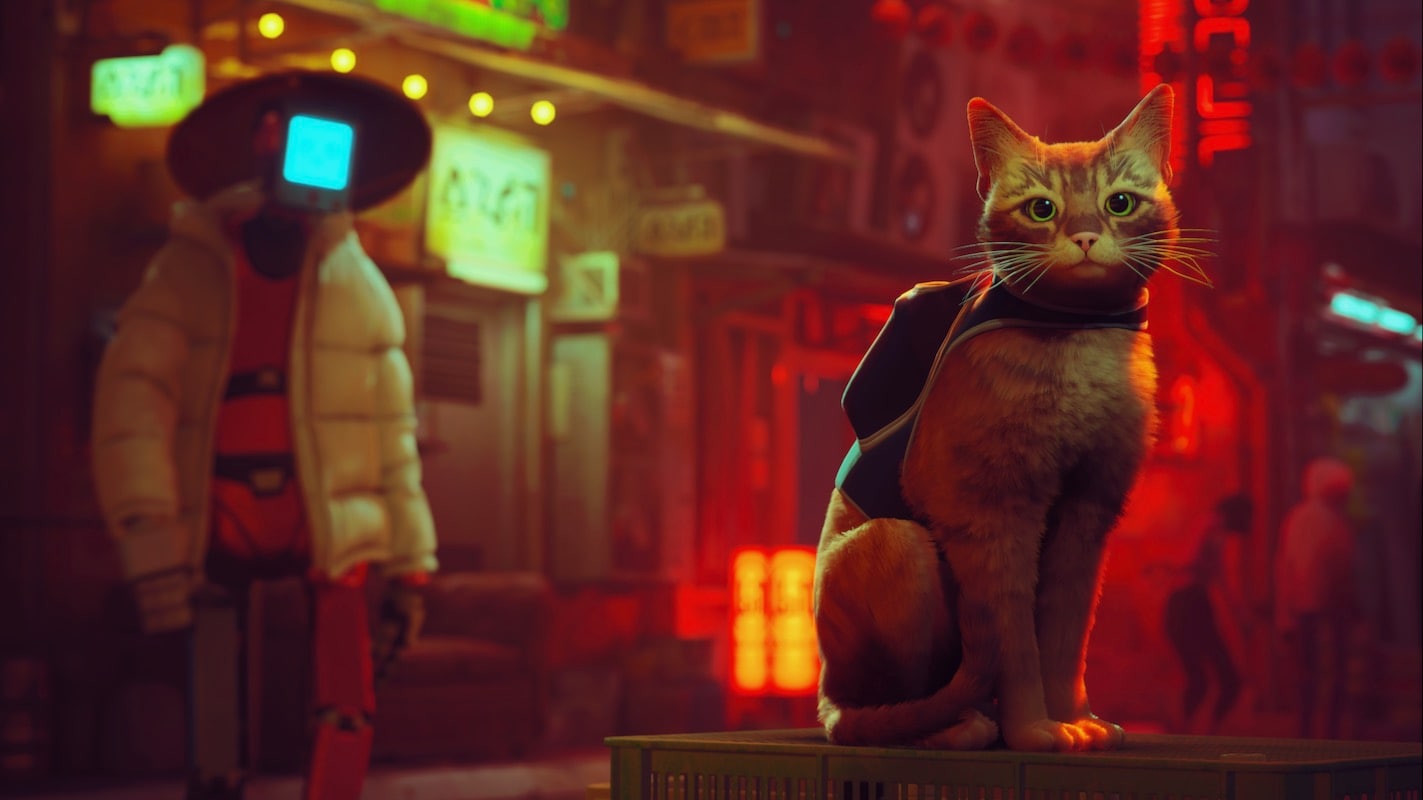 In Stray — out Tuesday on PC, PS4, and PS5 — humans are nowhere to be seen. They have either left for another world, or have perished as a species. You can piece together bits and parts that Stray feeds you across its narrative. Though the humans are gone, their fingerprints are all over the world of Stray, a cyber city enclosed under a giant dome that brought to my mind Zion from The Matrix. You’re safe within its confines, but dangers lurk — or rather, zurk. I’ll explain that in a minute — everywhere outside of it. And just like in the Wachowskis’ seminal movie, the outside world, the one that’s open to the sky, is considered to be uninhabitable in Stray.

According to developer BlueTwelve Studio, it will take you about eight hours to play Stray in full, and 10 hours maximum if you’re a completionist.

The hours I spent in Stray were all largely spent inside the game’s dome world, which is inhabited by lanky AI robots with screens as faces, who I imagine were also designed by the missing humans. They take after their creators in many ways, be it feeling cold, wearing clothing, or living in apartments that feel reminiscent of ours. They have even divided themselves into various roles and occupations. There’s a guardian, a weaver, a barkeep, a programmer, a market seller, and trash scavengers. Others are happy to just toss paint buckets from one roof to another. For all intents and purposes, the robots are the humans on Stray.

And in the middle of all this is you — a cat. If you didn’t already know / the cover image didn’t give it away, Stray puts you in control of a stray cat who somehow finds its way into the dome world. Very early on, you will be gifted with a floating droid companion in B-12, who helps you carry an unlimited inventory of items, interact with gadgets, scan and translate text, and provide hints. Assisted by B-12 whose memory has been corrupted, you — as the unnamed cat — set out to piece together the mystery of the dome world. What happened to it, how to get out of it, where the humans have gone, and why the world seems devoid of all life forms.

Stray, Marvel’s Avengers, and More on PS Plus Extra and Deluxe in July

There’s a gentleness and solitary nature to Stray. For one, the cat doesn’t talk, except it can meow at a button’s press (“O”, or circle, on the DualSense or DualShock 4.) And while you do have a companion in B-12, it doesn’t offer running commentary. It only speaks in beeps and boops when you ask it to do something. For the most part in Stray, you feel like you’re floating around the in-game world, as you go about discovering what exactly occurred in its universe. The AI robots, meanwhile, have little understanding of their 7-foot presence. When they first spot you in Stray, they are terrified for their lives, which makes absolutely no sense. Who’s afraid of a cat?

Well, to be fair, there’s more to it than that though. To the robots, the cat resembles a zurk. In their size and how they are both four-legged. What’s a zurk, you say? I don’t wish to spoil more of the Stray lore, so I’ll keep the description to a minimum. Zurks are, in a way, the primary enemy in Stray. They are tiny four-legged creatures that move in packs, can run at high speeds, fling themselves at anyone that moves, and can latch ferociously onto you. They suck the life out of you — and hence, as the cat, you must do your best to stay away from them. And if they do grab onto you, press a button (“O” again, incidentally) to throw them off and run for safety (“R2”, right trigger.)

Because a cat is smaller and more agile than humans and Stray’s robots, it has a better chance up against zurks. Moreover, its size allows it to get through nooks and crannies, and walk in places where humans couldn’t, either because of their size or weight. A lot of Stray is about traversal, as you climb your way in and across levels, with the game literally taking you up. But climbing isn’t natural — and you can only do it if Stray allows you to. You must move around until you see the “X” button (or cross) appear, following which you can hit it and get the cat to jump. I would’ve preferred a more natural and free form method, a bit like Assassin’s Creed, where you push the left stick in a direction, and the cat just climbs.

Stray to F1 22, the Biggest Games in July

While I was content with Stray’s implementation of jumping during the traversal bits, it can get in your way during combat sequences where you need to move quickly to stay alive. A precious second or half waiting for “X” to show up can mean the difference between life and death. Especially when there’s a swarm of zurks at your back. It’s frustrating to have to redo a portion of the level just because the prompt didn’t show up. (For what it’s worth, the prompt-driven approach does make Stray’s straightforward puzzles fairly easy to navigate. Stray is a mix of traversal, combat, puzzle solving, and interacting with others, with most of the game devoted to the first and last bits.)

On the PS5 — the system of our choice — Stray was a roughly 7.5GB download. Steam says you will need 10GB free space to install Stray on PC.

The much bigger frustrations though are the bugs, one of which more or less halted my progress. An NPC got stuck in mid-air, several metres away from where they were supposed to be. It didn’t help that they never interacted with the entrance they were trying to direct me to, and the fact that said entrance was shrouded in darkness. More annoyingly, even a full restart of Stray didn’t solve matters, with the bug seemingly getting saved as is. (I wrote to the Stray developers, but didn’t get a comment in time for publishing.) I nearly gave up on the game altogether, and if it wasn’t for a video walkthrough, I don’t imagine I would’ve felt like coming back to it.

I wish Stray didn’t get in my way of enjoying it. That said, kudos to the developers for recreating what it’s like to slinker as a cat. From the gait to the jumps, Stray really nails feline movement. Surprisingly, they didn’t go the mo-cap route, but rather good ol’ hand animation. Stray also replicates beloved cat memes, including their love to stick their heads in a bag (completely losing any sense of direction and very funny) and jumping into cardboard boxes (used in stealth-driven combat scenes). Like that spectrum, Stray swings between a variety of genres, from heartfelt anime to atmospheric horror, and from sleepy backwaters to pulse-pounding thriller.

While animals have served as human companions, attack assists, and Easter egg distractions throughout the history of video games, Stray — in what’s a rare thing — asks you to play as one. It’s nowhere near purr-fect, but it’s a delight nonetheless.