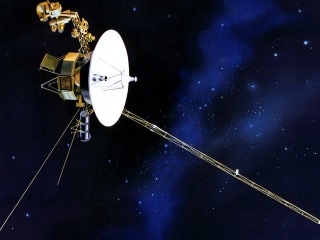 The National Aeronautics and Space Administration, the USA’s space agency, has conducted several probes and expeditions over the years to find answers to several hidden answers. In 1977, NASA launched Voyager 1 and Voyager 2 to fly across the solar system and give humanity unprecedented access to the world far away from us. On each of these spacecraft was a 12-inch gold-plated copper disk. Later known as the Golden Records, these disks had music and photographs engraved on them for any intelligent beings the spacecraft met on their long journeys.

After visiting Jupiter and Saturn, the twins parted ways: Voyager 1 studied Saturn’s moon Titan while Voyager 2 swung past Uranus and Neptune. Today, Voyager 1 is the farthest human-made object from Earth at a distance of almost 24 billion kilometres in interstellar space.

The Golden Records have messages packed in a bottle, which include spoken greetings in 55 languages, sounds, and images from nature. It also had a written welcome message from Jimmy Carter, during whose presidency the spacecraft was launched.

The Golden Records were built to last a billion years in space, but these little pieces of humanity could exist for trillions of years, says James Edward Huchingson, Professor emeritus and lecturer of Religion and Science at Florida International University. The professor has published a piece in The Conversation in which he has tried to throw light on what the Voyager Probes could teach about humanity and legacy.

“For many people, immortality is the everlasting existence of a soul or spirit that follows death,” he wrote. “It can also mean the continuation of one’s legacy in memory and records.”

The Golden Records on the twin Voyager spacecraft provide such a legacy but it is only meaningful if it is discovered and appreciated by an alien civilisation in the future. “With Voyager 1 and Voyager 2 estimated to exist for more than a trillion years, they are about as immortal as it gets for human artifacts,” the author added.

All living species, the mountains, seas, and forests would have long gone even before the Sun runs out of fuel in about 5 billion years. But the two Voyager spacecraft will still be floating in space, along with the Golden Records as testimony and legacy of Earth.